Move On When Reading: Implementation of a Third Grade Retention Policy in Arizona 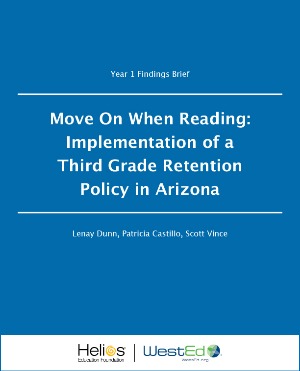 Third grade is often referred to as a “critical point” (Coffman & Kauerz, 2012, p. 3; Hernandez, 2012) in a student’s academic development, marking the student’s transition from what has been called learning to read to reading to learn (Snow, Burns, & Griffin 1998). Accordingly, policymakers across the United States are designing statewide policies to address third grade reading achievement. In 2010, Arizona’s legislature created Move On When Reading (MOWR), a policy requiring schools to retain third grade students whose reading scores on the state test are within the lowest performance level. MOWR was modeled after a similar policy in Florida, and several other states have adopted or are considering adopting third grade reading retention policies (Miller, 2014).

MOWR was passed in 2010, and the portion of the policy that affects student retention in third grade first took effect in spring 2014. Initially there were two categories of students who were exempted from the policy’s retention requirement: students who were receiving special education services and whose Individualized Education Program (IEP) team agreed that promotion would be appropriate; and English Language Learners (ELL) who had had less than two years of ELL instruction. Amendment SB 1461, passed in March 2015, added exemptions for students who are in the process of a special education referral or evaluation and students who have been diagnosed as having a significant reading impairment, including dyslexia. In 2015, the retention portion of the policy was not enforced because Arizona was transitioning from Arizona’s Instrument to Measure Standards (AIMS) to a different statewide achievement assessment, AzMERIT.

Move On When Reading: Implementation of a Third Grade Retention Policy in Arizona