Increasing FAFSA Completion in Florida: A Playbook for Success

Helios Education Foundation is dedicated to enriching the lives of individuals in Arizona and Florida by creating opportunities for success in postsecondary education. According to the National College Access Network, high school seniors who complete the Free Application for Federal Student Aid (FAFSA) are 63 percent more likely to enroll in postsecondary education than students who do not complete the FAFSA. Helios Education Foundation, along with many organizations throughout Arizona and Florida, has prioritized FAFSA completion as a key strategy to encourage all students – but especially those from first-generation, minority, and underrepresented communities - to pursue postsecondary education.

This brief is the result of a collaborative partnership between Helios and the Florida College Access Network to provide valuable information and resources to help support FAFSA completion in Florida.

What is the FAFSA and Why is it Important?

FAFSA stands for Free Application for Federal Student Aid. It enables students and families to apply for federal student aid, such as grants, work-study, and loans. Together, these types of federal student aid amount to the largest source of financial aid available to help students pay for college.

FAFSA stands for Free Application for Federal Student Aid. It enables students and families to apply for federal student aid, such as grants, work-study, and loans. Together, these types of federal student aid amount to the largest source of financial aid available to help students pay for college. Completing and submitting the FAFSA is free and easier than ever, and it gives students access to the largest source of financial aid to pay for college or career school.

Florida is at a critical juncture in determining its economic future. Currently, only 49.6% of Florida’s population holds a certificate, or associates degree or higher (See Figure 1 below). For minorities, this proportion is even lower. For example, 30.1% of African Americans have a certificate or higher and 36.2% of Hispanics do so. In contrast, 45.4% of Whites in Florida have a postsecondary certificate or higher. Yet, according to the Georgetown Public Policy Institute, more than 68 percent of Florida jobs will require at least some amount of postsecondary education by 2020 (Carnevale, 2013). Considering the importance of postsecondary education attainment, a critical question the state must answer is: How can Florida increase postsecondary opportunities to further economic prosperity and viability?

One of the most obvious ways to increase economic opportunities is to increase the proportion of high school students matriculating to college after graduation. Yet, over the last four years, the college going rate in Florida has been relatively flat with a sharp decline in 2019. According to a report released by the National Student Clearinghouse, between 2018-2019 Florida saw the largest dip in enrollment (-5.2%) among degree granting institutions nationwide (National Student Clearinghouse Research Center Term Enrollment Estimates 2019).

One set of strategies that has tremendous potential to increase postsecondary enrollment are those focused on increased FAFSA completion rates. Prior research out of the National Center for Education Statistics shows that roughly 90% of high school seniors who complete the FAFSA attend college directly after high school, compared with 55% of non-completers. Because of this strong association between FAFSA completion and college-going, many organizations and states have implemented FAFSA challenges or completion campaigns to increase the proportion of students going to college directly after high school. For example, the National College Access Network led a 2016-2017 FAFSA completion challenge in 22 cities across the country. Overall, NCAN’s grantees increased completion by 10% in two years (NCAN Why Invest in Increasing FAFSA, 2017).

In Florida, getting more high school graduates to attend and complete college has tremendous economic benefits for individuals and the state as a whole. Numerous studies have showed the tax and social benefits for states with a more highly educated workforce. For the individual, this translates to higher wages and greater financial opportunities. For example, according to the most recently reported data from the U.S. Bureau of Labor and Statistics, the median wage for a person in the United States with a high school diploma or no college is $712 a week, Comparatively, a person with an associate degree makes $836 a week, while an individual with a bachelor’s degree makes $1,173 a week (see Table 1). 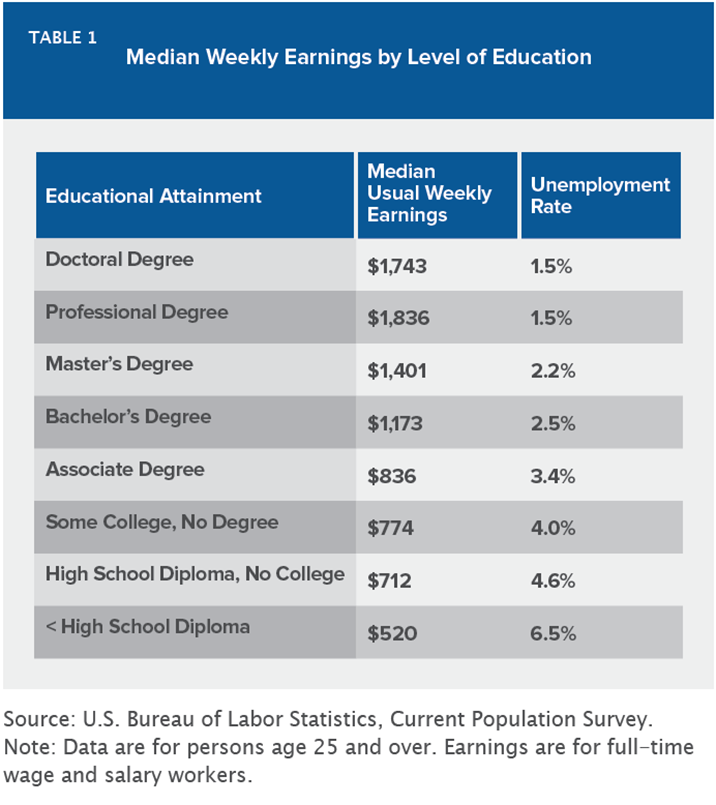 In 2014, President Obama announced that the U.S. Department of Education and state student aid agencies would partner to provide necessary data to identify individual students who have not completed their FAFSA. Previously, high schools relied on self-reported surveys to estimate their FAFSA completion rate, which were often inaccurate. Currently, Federal Student Aid (an office of the U.S. Department of Education) provides state agencies with data about students’ FAFSA submissions and completions so that schools can ensure higher rates of completion.

The Florida Department of Education’s Office of Student Financial Aid manages the FAFSA data sharing agreements between the state and school districts in Florida. Through the data portal, school districts can see which students have completed a FAFSA and a Florida Financial Aid Application—the form used to apply for state aid including Florida’s largest investment, the merit-based Bright Futures Scholarship. Unfortunately, not all districts take advantage of accessing this data with Office of Student Financial Aid. As of January 2020, 32 of Florida’s 67 school districts, and Florida Virtual School have FAFSA data sharing agreements.

The Florida College Access Network leads the Florida FAFSA Challenge, a statewide initiative aimed at increasing FAFSA completion by 5% each year. Using statewide data in 2013, FCAN estimated the graduating class missed out on over $100 million in Pell Grants because they failed to complete the FAFSA. To increase awareness and support students, FCAN started the Florida FAFSA Challenge in 2014. In the 2014-15 school year, 52.5% of Florida high school seniors completed a FAFSA—ranking the state 39th in the country. While Florida in 2018-19 still trailed the national average of 63.3%, the state made significant gains in four years with a completion rate of 60.3% and overall rank of 31st in the country.

Some states like Tennessee have created state programs that incentivize students to complete the FAFSA. Under the Tennessee Promise program, which covers unmet financial need for students at the state’s community colleges, FAFSA completion is required for all participants. The program was introduced in 2014, and, as a result, FAFSA completions by Tennessee high school graduates increased from 31,000 to 45,000, where they remained steady in 2016.

Louisiana implemented FAFSA graduation requirements. The results are promising. Other states are exploring the potential of requiring FAFSA to graduate.

One of the newest trends aimed to increase FAFSA completion has been the decision by some states to require completion as a condition for high school graduation. Beginning in the 2017-18 academic year Louisiana became the first state to require FAFSA completion as a condition for graduation. Under this policy each graduating student has to complete the FAFSA in their senior year of high school or opt out with a non-participation form or waiver.

In its first full year of implementation, the Louisiana Department of Education announced a record number of graduates (25,803) that enrolled in the Fall of 2018. In addition, the state also reported an increase in the graduation rate, as well as an increase in the rate at which students earn early-college credit or state approved industry-valued career credentials. Overall, 57.4 percent of graduates of the class of 2018 enrolled in a postsecondary institution after high school.

Most recently Texas became the second state to require the FAFSA as a condition for high school graduation beginning in 2021. Like Louisiana, the Texas policy will allow students to opt out for good cause. In Texas, students can also satisfy the requirement by completing the Texas application for State Financial Aid. Other states such as Indiana are also currently looking at options for requiring FAFSA completion for graduation.