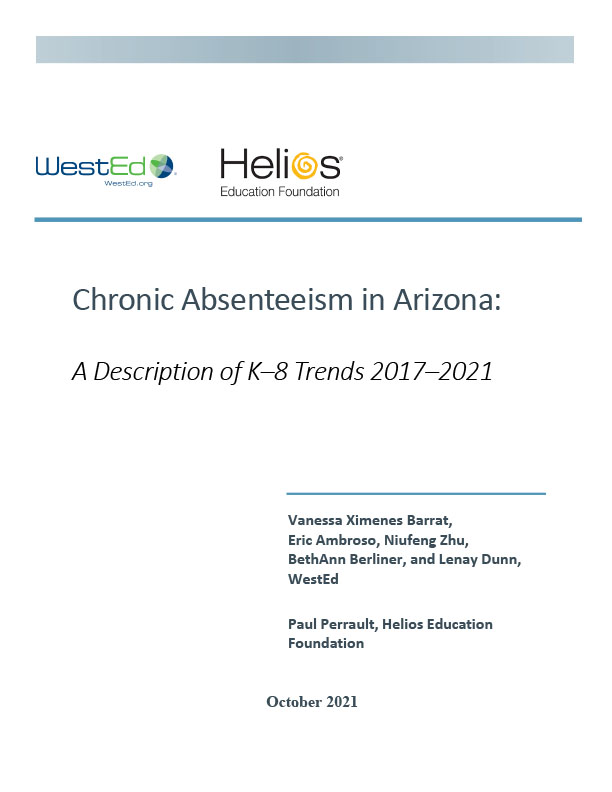 This statewide study of Arizona schools, co-developed by WestEd and the Helios Education Foundation, documents K–8 trends in student absences, which student groups and grade levels have the highest rates of chronic absence, and how rates compare across districts before the COVID-19 pandemic and during the pandemic.

In Arizona, chronic absence is a school accountability measure that is defined as a student being absent from a given school for any reason (excused and unexcused) more than 10 percent of a school’s calendar year (e.g., 18 days for a typical 180-day school year that meets 5 days per week).

Pre-pandemic, the rates of chronic absence were stable in Arizona at about 14 percent. During the pandemic, with the physical closure of school buildings in spring 2020, the chronic absence rates declined to 9 percent as schools stopped reporting attendance. This may or may not represent improved attendance for any individual student. In 2021, the state’s chronic absence rate exceeded pre-pandemic levels and was up to 22 percent. Compared to previous years, the average number of days absent in a given month increased after the outbreak of the pandemic and a higher percentage of students reached the cut-off for being identified as chronically absent earlier in the school year.

Overall, as often documented in the literature, the percentage of chronically absent students was higher in the early elementary grades than the upper elementary grades but increased again across the middle school grades.